BU QUALIFIES FOR INTERNATIONAL ROBOTICS COMPETITION
Category: Past Events May 10, 2016 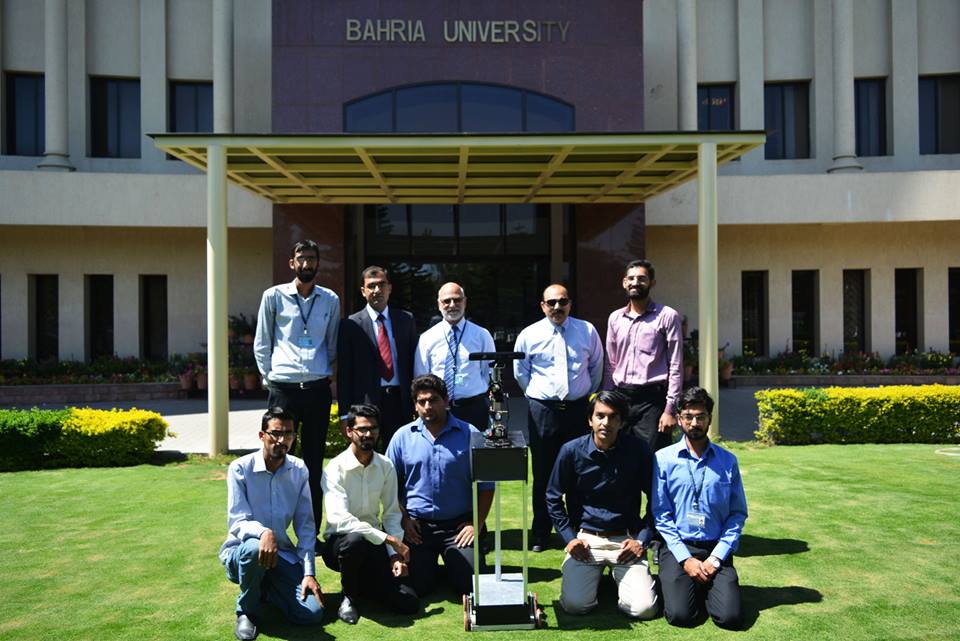 RoboCup is the leading and largest competition for intelligent robots , and one of the world’s most important technology events in research and training.
The International robots competition , RoboCup@Home, is about to hit off soon which is being held annually since 1997. The main aim is to promote the research in the areas of human-robot interaction and co-operation, computer vision navigation , object-recognition , and manipulation etc. RoboCup@Home competition consists of benchmark tests that the robots have to solve in a given scenario of a basic home environment. This will help to develop the service assistive robot technology with high relevance for future domentis and personal applications. RoboCup@Home is one of the major leagues of RoboCup , which includes RoboCup@Work , RoboCup Rescure , RoboCup Junior and RoboCup Standard Platform League.
The team ‘Machinilog’ from Bahria University Islamabad, which is one of the leading institutes in Science and Technology – after indigenously designing a robot has successfully qualified for the RoboCup@Home 2016. The team comprises of five under-graduate engineering students, Haseeb Aslam (team lead), Tahir Mehmood, Basit Akram, Osama Ahmed and Hamza Hakeem along with two mentors, Arsalan Akhter and Ammar Ajmal.

“Qualification is unquestionably a milestone in our journey of RoboCup@Home competition. It is the result of tireless efforts of the team and interminable support from our mentors that we have qualified. We hope to do well in the competition.” said Haseeb Aslam, the team lead of ‘Machinilog’.

In order to qualify for this specific league, the teams are supposed to design robot capable of performing some benchmark tasks in a given scenario of a basic home environment. Furthermore, they have to submit a qualification video of working of the robot along with a team description paper describing their work to the RoboCup Federation. All of these are assessed on the amount of scientific contributions, design techniques, creativity and innovation involved in the designing of the robots.
“I know for a fact that this team could do wonders, if provided with the right infrastructure and resources required.” said Arsalan Akhter, project supervisor.
“I have seen students spend numerous nights at the university. I am glad that their efforts have proved to be fruitful in the form the qualification. I wish them best of luck for the event.” said Prof. Dr. Shehzad Khalid – Head of Computer Engineering Department.

Rector BUIC, Mr. Tanveer Faiz HI (M) added; “The fact that the students from all disciplines of academia are excelling, gives me an immense pleasure. Such events have proved that Bahria University being started as a Business and Management Institute has now grown into a full fledge knowledge base and ground vehicle for excellence in all the modern fields of academic domains. ”
Undoubtedly, Pakistan has all the intellectual capacity it needs to transform from an underdeveloped country into a developed one.